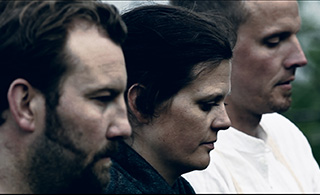 Once upon a time there were two married men from Stjørna. They both took a fancy to Barbara, the wife of the farmer at Husby. One winter Barbara and the two lovers came up with a plan to get rid of her husband. They drilled a hole in the wall right by the bed of the married couple. Then the wife was supposed to tie a rope around her husband’s neck while he was asleep. The two other men stood outside the house at the end of the rope, choking the man to death.

After the murder the body was hidden under a cliff and covered up. Then they flipped rowing boat and sent it drifting into the bay, so people would assume the man had drowned.

But the crime was discovered, and the corpse found. Barbara and her two lovers were sentenced to death. They were executed at Refsneset, and their heads were placed on stakes on separate islets off the cape. These have later been known as the Stekkelssteinene islets.