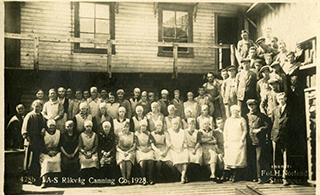 Hilda received her first pay cheque in 1917. Before that she worked at home on the farm, like her mother and grandmother. Råkvåg in Fosen had become a busy village thanks to the precious herring. The herring brought opportunities for paid work to Fosen, and Råkvåg Canning was established in 1914.

Hilda and the other women in the village became sought after labour. To begin with, Hilda was happy for her wages. But in addition to working, women still had the same household chores and animal tending at home. Not to mention taking care of the children. The days were long and strenuous, and the women weren’t paid nearly as well as the men.
Frustration grew among Hilda and the other women at the factory. The men had better working conditions and easier work, but still received higher wages! The women were becoming more aware of their own work and the rights they lacked. Quite recently, in 1913, Norwegian women had gained the right to vote. But there was still a long way to go.

The conflict escalated. Female factory workers left their stations, protesting the unequal treatment. They went on strike. The men and the factory owners were shocked. This was unheard of. Had the workers been inspired by the Russian Revolution of 1917? Had communism found fertile ground in this small fishing and farming community on the edge of Europe? After being on strike for a few hours, the older women started returning to work. Soon, the conflict was over.

Hilda was exasperated. The strike was a brave move, but had not changed anything. But in time she realized that the strike nevertheless had left its mark. The herring factory workers were the first to go on strike in Fosen. And the surprising thing was that it was the women who went first. They lost in the short term, but they helped pave the way for the rights of their daughters and female descendants.