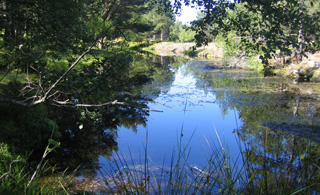 At the start of the 20th century, landowner Anders Refsnes (1879-1939) dammed up the pond on his farm in order to produce ice. The ice from the new ice pond was needed to keep the salmon caught in the seine nets at the farm cold and fresh during the voyage to Trondheim.

Today the ice pond at Refsnes looks just like any other small pond. But when ice was produced here, the people on the farm worked through spring, summer and fall to keep the water clean and clear until the ice finally formed. Cloudy water full of plants yielded poor quality ice and unwanted bacteria. It was also important to keep the ice clean through winter, so a lot of time was spent clearing away snow. Snow and slush also lowered the quality. When the ice on the pond was thick and hard, the ice cutting could begin.

An ice saw was used to cut the ice. First the ice was cut into large but manageable blocks. But it was still hard work getting the blocks of ice out of the pond. Special ice grapples were used. A homemade hoisting contraption (alt: mechanism) was attached to the horse sled and ice blocks were hoisted out of the water using the grapples. This allowed the workers to avoid too much contact with the icy cold water, and made the work less strenuous. After the ice had been lifted onto the sleigh, blocks were transported to the icehouse on the other side of the cape. The building was dug into the ground and had thick wooden walls facing the east and north. The walls were filled with sawdust, allowing the ice to stay cool until late summer.The ice crusher was also part of the ice production. It crushed ice into smaller pieces which were then filled into boxes along with the salmon.

The ice pond is still here, telling a tale of fresh salmon and entrepreneurship few decades ago, yet still long enough to predate the mainstream introduction of electrically produced ice.