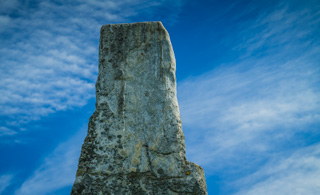 In 1773, during his journey through Norway with the aim of writing a grand work on Norwegian history, historian Gerhard Schøning looks out across the landscape of Stadbygda in Rissa. He is overwhelmed by the amount of burial mounds placed one after the other alongside the fjord, as far as the eye can see. He counts 78 mounds in total, and concludes that “…Stadsbygd has in times past been the home of grand and famous men, among them kings and earls. Of this there can be no doubt, considering the many memorials still seen; remarkable giant mounds, standing stones, and old boathouses which will now be accounted for.”

In his accounts concerning the Rein farm, the travel log states; “On the fields of this farm, there are two round mounds which are now mostly ploughed flat, placed at the very brink of the steep coastal hillside. Between them is an oblong mound. But east of them, and south of Rein, on the same brink, sits a large standing stone. Just above and east of the stone, on quite high ground, there is a tall and extensive cairn, or giant mound, consisting of rocks, about 131 steps in diameter. To the south, on a bank, there is another, smaller cairn of rocks which can be seen from afar. Some steps beyond the aforementioned giant mound, lies another of almost equal size, but covered by soil, and between them, north of the standing stone, a smaller oblong one. One of these two large mounds must surely be the resting place of the man, in whose memory this stone was erected.”

In 1773 there were still eight burial mounds surrounding Rein. Today, looking across the fields, two mounds remain visible. The others have been obscured or completely removed by years of ploughing and cultivation.