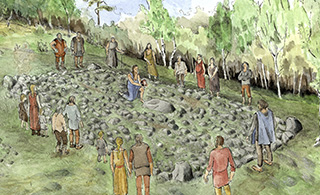 Out here on the Refsnes cape there is a burial ground from the Iron Age. The ground consists of several circular mounds plus one that stands out; a very rare grave, quite unique in Norwegian context. The grave is a square mound, large and rectangular, almost like a land lot, constructed as a barrow of pebbles, framed by a single row of larger rocks. Every corner is marked by large stones, which once stood upright. Only a few other locations in Norway have identical or similar graves. The design is more common in Sweden and Denmark. The existence of such a grave here at Refsnes suggests contact across vast distances. Maybe the deceased had been on a long voyage? Perhaps he or she was an immigrant?

Northwest of Nørresundby (Aalborg) with an expansive view of the Limfjord we can find Lindholm Hoje, Denmark’s largest Early Iron Age burial ground. A large number of graves are cremations, many of which are marked by cairns (alt: rock piles). The most common formations are oval or ship-shaped, but there are also triangles, squares and several other varieties. The square mounds at Lindholm Hoje seem to be from the seventh or eighth century. Cremation appears to have taken place on site. In some cases, a cremation site has been covered, and a new fire lit on top of it. Remains of pottery have been discovered in these secondary fires, and occasionally unburnt animal bones. This has been interpreted as rituals following the burial; a part of the burial cult. Interestingly enough, it appears that the shape of the grave markers at Lindholm Hoje have been determined by the gender of the deceased. A general feature is that there is a certain connection between the square stone formations and female graves. So perhaps a woman was once commemorated with a square mound and standing cornerstones at Refsnes many, many years ago?

What do graves like this mean, the ones that distinguish themselves from others at the same burial ground? Are they just expressions of trends or are there deeper meanings behind these peculiarities? The square mound at Refsnes shares common traits with mounds of the same type found elsewhere. They are similar in shape and size, have raised stones in certain places – usually at each corner – they are located on flat land, near saltwater and routes of communication; and they are very rare in Norway. We will never know for sure, but it seems likely that the person buried was someone beyond the ordinary to deserve such an unusual monument.