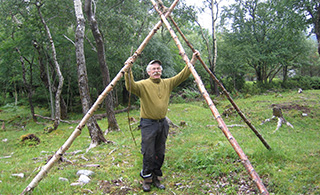 Between five and six thousand years ago, there were three houses at Refsnes. Maybe not houses in the modern sense. But nevertheless solid structures, which provided shelter to the people who lived here at the time.

From the Early Stone Age, over ten thousand years ago, people used a movable form of shelter, a tent which they packed up and brought with them when moving from one place to the next. Following this initial tent era, still in an early phase of the Stone Age, we find that people began building regular houses.

On beach ridges and other dry places, the people of the Stone Age created round, bowl-shaped depressions in the soil. And on top of these they built walls and a roof to keep the weather out. Archaeologists have not found any remains that can tell us what the walls and ceilings were made ​​of, but if we imagine something resembling a goahti (Sami hut), we are probably not far from the truth. And these homes were reasonably spacious; a floor area of up to 10 square metres is quite roomy when you are used to a limited space. The remains of the foundations are still visible today.

The homes have been easily warmed up and contained the heat well. They were most valuable during winter, when the cold, wind and snow led to longer indoor stays. If you close your eyes you can probably imagine the warmth, ambiance and laughter around the fireplace inside the home on a chilly winter day, where stories from land and sea were shared and handed down to younger generations.

These remains, outdating the pyramids of Egypt, tell us that Refsnes has been a good place to stay since the first people came wandering from the south after the last ice age.