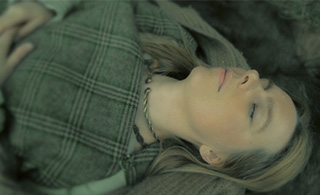 Sometime during the Early Iron Age, more than 1500 years ago, a woman was buried in a mound on a Refsnes hillside. Some of her belongings were placed in the grave with her, and on top of the tomb, friends and family assembled a cairn of rocks as a monument to her.

Over time, the single burial mound became over 40 mounds placed together to form a large burial ground. The graves were easily visible from the bay. From their mounds the dead could gaze out across the land, beach and sea, watching over their farms and families.

Years passed and times changed. The Old Norse religion gradually disappeared as Christianity was introduced throughout the country. The ancient tradition of burying the dead in mounds by the farms was replaced by new Christian burial rites at cemeteries in consecrated ground.

The old mounds at Refsnes were left abandoned and forgotten, and as centuries passed they became hidden, overgrown by bushes and shrubs. The ancient burials and the traces of our ancestors and their life and death were hidden beneath sprawling scrub and vegetation.

1500 years after the woman was buried in the mound at Refsnes , the ancient burial ground was rediscovered by archaeologists. And in order to allow everyone to experience the mounds in the beautiful countryside which surrounds them, and take part in their history, they had to be made visible once more!

Since then, young and old, landowners, archaeologists, school groups and others have been working hard to clean up the ancient burial mounds. They have felled trees and removed shrubs, scrub and vegetation, in sun and heavy rain, through calm and stormy weather. Gradually, small and larger mounds appeared at the ancient pagan burial ground, mounds that give us opportunities to gain insight into old mythology and how men, women and children once lived and died here along the fjord.

The mounds at Refsnes are once again in the open, visible in the landscape as they were meant to be. Today we can stand and gaze across the old graves and ponder the many mysteries of the past. In this way, what was created long ago and what is created today through clearing, organization and accessibility becomes valuable elements in the cultural landscape of our future.